Health competence in the spa-heart of Europe 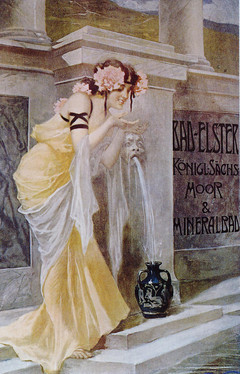 Bad Elster is Saxonys most traditional state spa and one of the oldest german moor mud and mineral spas. It`s located right in the middle of Saxony, Bohemia and Bavaria in the midst of the worldwide known European balneology region in the heart of Europe. After the first documentary mention in 1324 first spring was scientifically analyzed in 1669 and was devoted to the former territorial lord, duke Moritz von Sachsen-Zeitz. This mineral spring was also appreciated by Johann Wolfgang von Goethe in his epos “Hermann and Dorothea” in 1795. Before Bad Elster was raised to “Royal Saxon State Spa” in 1848 already in 1818 first warm mineral water baths were offered in modest woodsheds. Today the “King Bath” belongs to the most traditional and prestigious spas in Germany.

Bad Elster today is an experienced location of health care and offers with it` s ten mineral springs (already treasured by kings of Saxony) and the healthy natural moor mud a widespread competence in the sectors of modern spa therapy. Today this spa therapy is not an alternative for academic medicine, it` s used in addition for chronically diseases, health care and the support of healing and regeneration in particular. Against this background the Sächsische Staatsbäder GmbH offers individual health, remedial and preventive treatments.

Key aspects of the spa in rehabilitation are the abatement of cardiovascular diseases, diseases of brace and Musculoskeletal system as well as urinary tract collection system and kidneys, dysfunction of metabolism and female complaint. The Sächsische Staatsbäder GmbH and six nationwide well-respected specialist hospitals give thousands of persons in search of healing an effective and competent medical treatment.