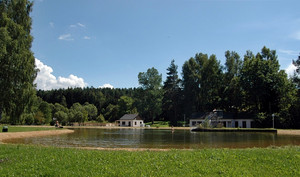 In the district Sohl lies the idyllic, popular natural pool, which was rebuilt in 1996. The water is not chemically treated, because you can rely on the continued inflow from the famous headwaters  “Gründel”. The natural pool in Sohl close to Bad Elster  has a barbecue area, a sunbathing area, mini golf, a playground and a volleyball court. Admission is free.

In the year 1959 the construction of a natural bath was decided in the meeting of community representatives. The pond self was divided into a swimmer and in a non-swimmer pool and includes not only the warm up pool also had changing rooms, an "abortion facility", a bowling alley (1983), a volleyball court and a snack-building. The water of the basin since the existence of the pool comes from the “Gründel”. Since the opening there are no opening times or admission fee. In his original form the pond served the people of Sohl and their guests a popular recreational area in which many village festival and even bonfires took place. Between 1990 and 1994, a filtration system to improve water quality has been installed and built a climber and a mini golf course. After extensive renovation, the natural pool in Sohl was inaugurated in 1996 new.