Prestigious ground in the heart of town 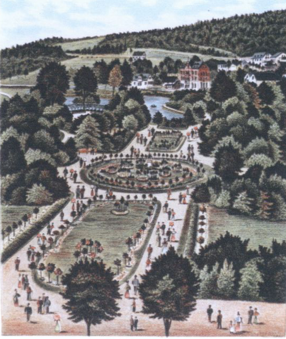 Historic view: The Rosarium around 1890

The Rosarium at the entrance to the park “Paul Schindel” was laid out already 1882/1883 and shines like new today. As part of the EU-project »ParkErlebnisse Bad Elster- As« the ground was completely refurbished in 2012. Thereby the structuring was brought as far as possible into line with the historic proved initial situation.

Core of the new refurbished ground is the slightly excessive round patch with a radius of nearly 12 meters. Like in Paul Schindels time the center of the round patch is a Canary Island date palm (Phoenix canariensis) with 200 roses around.

On the ornament patches along the major axis roses and season plantings decorates the Rosarium. Today the already in kings times existing pergola is again a landmark of this historic garden. Furthermore in the new Rosarium visitors can admire 40 red and white shaped trees (Crataegus laevigata “Paul´s Scarlet” and Crataegus prunifolia) in turns as bordure of the grass square in the ground.

The Rosarium Bad Elster was laid out as a new prestigious ground of the aspiring health spa on the area of the former manor in 1882/1883. Target was the creation of a baroque garden based on French model. To the present day the Rosarium presents itself as a formal garden, even when the origin design ideas were overlapped by influences of different eras. All grass and planting areas were divided into geometrical forms. Concurrent the path system forms the visual axis whose centre was pointed by an excessive carpet patch. Round and round this centre an occasionally round, later quadratic basic figure was laid which was market by four solitary trees. Two of these ash trees are still remaining. Emphasis of the Rosarium were nearly 500 color assorted roses in more than 200 varieties.