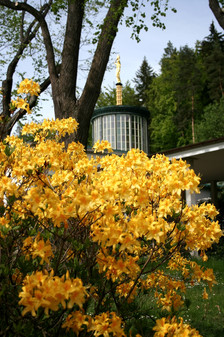 Crowd puller every year:
blossom of rhododendron in Bad Elster

The historic spa garden was laid out in style of an English landscape garden some time around 1850. With it` s six different parts it` s an important element of the royal facilities of Bad Elster and it`s counted among the most beautiful gardens in Germany. Together with the impressive spa style from time of foundation and the art nouveau there is a harmonious ensemble which was once constructed by significant European landscape gardeners. Thousands of visitors every year come to see above all the famous blossom of rhododendron in Bad Elster.

With the appointment of Elster as Royal Saxon spa in 1848 the spa garden assumed first shapes due to first compositions by Eduard Petzold, a student of Fürst Pückler. Later architecturally appealing parks and various theme gardens were laid out on more than 50 ha area by Max Bertram, horticultural director from Dresden, and the royal-saxon horticultural inspector Paul Schindel as well as Gustav Allinger and Herrmann Schüttauf. These parks and theme gardens representative borders the centre of Royal Convalescence House, historic bath “Albert Bad” and the magnificent King Albert Theatre until today.

After 1945 the park appeal was completed by wonderfully beautiful rhododendron plantings and the public green space of a wood garden. Since 1980 the entire historic spa garden is under monumental protection. Between 1996 and 2000 a large part of the parks was all-encompassing rehabilitated under a strict orientation on historic plans and specifications in order that you can widely experience the historic landscape architecture again today.